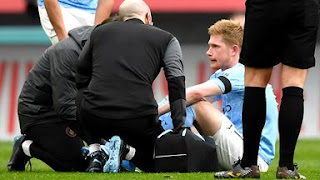 Kevin De Bruyne Suffered An Injury To His Ankle early in the second half in manchester city”s FA Cup Semi-Final  defeat to chelsea:

Kevin De Bruyne was injured in Man City’s FA Cup semi-final against Chelsea, with city to play in the Carabao Cup final on April 25

The midfielder was substituted after 47 minutes during the tie at Wembley on Saturday after landing awkwardly on his ankle following his battle for the ball with N’Golo Kante as he attempted to keep it in play.

De Bruyne was treated by City’s medical staff and then replaced by Phil Foden as he limped off the pitch.

CHECK OUT
How to Setup Glo Unlimited Browsing 2021