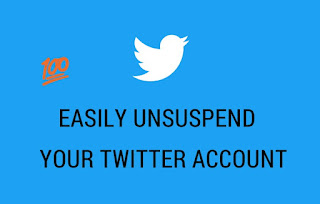 Suspension of twitter accounts happens funny sometimes users affected will keep wondering what he or she has done to have their account suspended having it in mind that they didn’t spam on twitter. You know spamming is repeatedly sending of same and several messages to different people or hash tags so you can get your whatever message across your target audience and millions of other people that might find interest in it, this informations and messages you sharing might be found harmful, against twitter rules and maybe promoting pornographic contents, twitter bots will surely suspend such account as they work to ensure twitter is safe for everyone including kids using it.

◾Don’t impersonate someone else just for the reason to grow your business or get followers.

Unsuspending of accounts will take days, weeks or maybe months depending on what you actually did to have gotten your account suspended, for my case it took only a few weeks so you might be lucky enough as well. 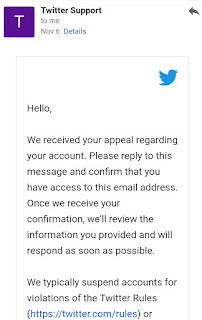 HI THERE, MY NAME IS [ enter your name], MY TWITTER ACCOUNT WITH USERNAME [ enter your twitter username] JUST GOT SUSPENDED AND I HAVE GONE THROUGH TWITTER RULES, I KNOW I SPAMMED BUT PLEASE UNSUSPEND MY ACCOUNT I PROMISE NOT TO EVER SPAM EVER AGAIN. THANK YOU AND I WILL REALLY APPRECIATE IT IF YOU GIVE ME A RESPONSE.

After sending this mail just await for an immediate response from twitter saying we just received a case from you, we will look into it and after some weeks if lucky days your account will be active once again. 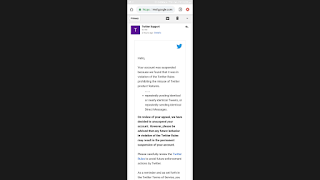 Am sure almost everyone that browse the internet will...
Read more
Dandalin Kimiyya

Good Day folks, I bring to you something amazing...
Read more

We share the latest updates Daily. We are Online here For 24 Hours Posting Latest Updates.

Stay Up With Us, If you need more info You can visit our Contact-Us Page.